Deciding when and how to wean your child from breastfeeding is a very personal choice. Only mom and baby can know when it’s time for their journey to end. Don’t let anyone else pressure you into ending it before you and/or your child are ready. Today I wanted to share our story of weaning a toddler with you in case you need inspiration, support, or just like reading other moms stories. It’s also a way for me to remember and celebrate our breastfeeding journey.

My daughter and I had a rough start to our breastfeeding journey. You can read all about the beginning of our journey in another post. There were times I was sure we wouldn’t make it. But we fought through all the tears and struggles and after a tongue-tie correction around 7 weeks old things improved. We were able to nurse until she mostly self-weaned at 18.5 months.

How I helped her along the way

I never forced her to drop feedings. But, when I saw that mid-day sessions were getting harder as she was very distracted, and sometimes just not interested, I slowly stopped offering them. If she came to me and clearly wanted to nurse we’d do it. But they became rarer and rarer.

This eventually brought us down to nursing only in the morning and at night. The next session to go was our evening session. I didn’t mind nursing her before bed, but we had been nursing in a rocking chair in her room right before bed. As she got bigger and bigger it became more difficult to find a comfortable position where I didn’t feel like she was going to fall…and where her teeth weren’t grazing me in an uncomfortable fashion! Luckily my daughter was not a biter. We only ever had 1-2 incidences where she tried to bite down. *fingers crossed* my next child is as kind to mommy as she was!

The first thing I did to combat this was to move the location and timing of our evening feed. I moved her evening nursing session. We started nursing in my room, the same place as her morning nursing session, and started doing it before we the rest of her bedtime routine. It only took about a week of the move for the evening session to mostly disappear. She was used to the rest of her routine and would often bypass going into our room to nurse. It was actually the quickest session to cut out! Again, I let her lead the way and if she wanted to nurse we’d go in there and nurse.

This is a photo of one of our last daytime nursing sessions, it may actually be the last breastfeeding photo I have. Spoiler alert: Getting photos of toddlers nursing is pretty difficult.

Now we were down to just one session. After she woke up and got her diaper change we’d bring her into our room and nurse before starting our day. Slowly she started only nursing from one side, apparently, my left boob was better for some reason. No matter, which side I started on she’d only latch on the right for a few seconds but would nurse normally on the left, so I simply stopped offering the right unless she decided she wanted it.

I was concerned when she went down to one boob, once a day that my milk supply would simply disappear. However, occasionally she would pull away and I would see a little milk so I knew she was getting something. When she was around 17 months old I got pregnant again. Within a few weeks, she randomly refused to nurse one morning. I wasn’t even aware I was pregnant at this point. She then went back to nursing per usual for the next week so I thought it was a random one-off. Then it happened again. She skipped days sporadically for a week or so and then she was done.

I stopped offering as she seemed less interested and she stopped pulling at my shirt in the morning and requesting it. Just like that our journey was over at about 18.5 months old. There have been a couple times where she’s motioned at my shirt on a random morning but we just distract her and she forgets all about it quickly.

I can’t say I was ready for this to happen. I enjoyed our few minutes of connection in the morning before we started the day. As a busy toddler, she rarely wants to be held or cuddled by mom so those few moments were precious to me. But I was also grateful. I was grateful that we’d been able to breastfeed for over 18 months. I had been getting concerned that my breasts may become more sensitive with the pregnancy and that I would be forced to forcibly wean her, or deal with pain. And I didn’t want pain to be my last memories of our breastfeeding journey. I also didn’t really want to force her to wean before she’s ready.

I’ve been told some children will want to nurse again when the new baby comes. Whether we will allow that if she’s interested is a bridge my husband and I will have to cross when that time comes.

Does anyone have a story of that experience with their own kids? I’d love to hear about it!

Our secrets to nursing this long.

What were the keys to our successful breastfeeding journey? Preparation certainly wasn’t one. I’m now an adamant supporter of breastfeeding education while pregnant. Our journey would’ve started much more easily if I knew half of what I know now about breastfeeding!

Support from other moms

Support from other moms is key! Whether it’s an in-person breastfeeding support group or an online group you will need other moms to talk to. I favored an in-person group in the early days, especially as I could do a weigh-feed-weigh there to see how much milk my daughter was actually transferring! The online support groups were great for late night questions and ongoing support after we stopped attending the in-person group.

The other key piece was support from my family, especially my husband. My husband was supportive from day one of our breastfeeding and breastfeeding for as long as we were both comfortable. He was ready to do battle with anyone who might have something to say, especially when we were in public. There were times I think he secretly hoped someone would say something just so he could let them have it. My husband is a mostly reformed bad boy lol. While he didn’t always get it, like when I wanted to include some breastfeeding shots in our 6 month photo shoot, he never discouraged me.

The rest of my family was also generally supportive and never made me feel uncomfortable about nursing. I did prefer not to nurse in front of male relatives but that was mostly due to my own comfort level. I just preferred to go into another room. The only one who ever made a comment was my step-mother who asked how long we were going to continue to nurse when my daughter was about 1 year old. The fact that we soon only nursed at morning and night helped as well since I’m not sure many of them knew that we still nursed until 18 months. They didn’t ask, and we didn’t tell! 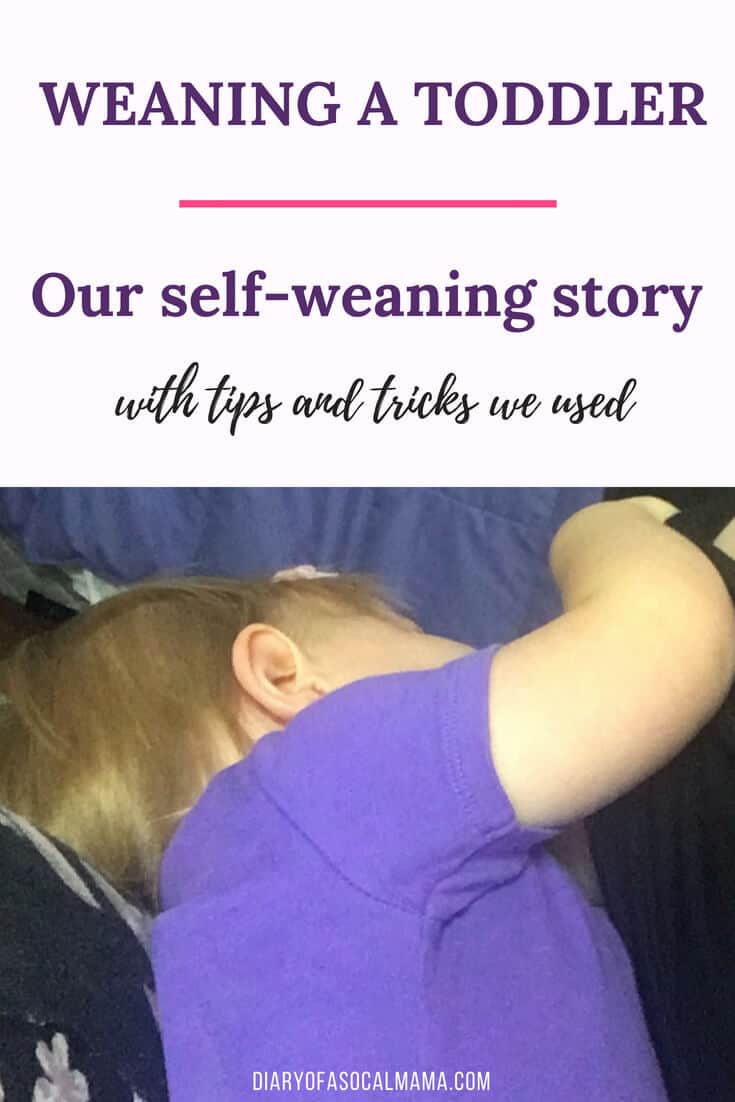 3 thoughts on “Weaning a Toddler: Our self weaning story & tips to help you”