I was about 7 months pregnant when Trump was elected. I was devastated…not just because my party had lost or because I didn’t care for Trump. I’d seen other Republicans get elected before but it didn’t instill the same fear. I was 7 months pregnant with a little girl and I now feared for her future. I had just witnessed a man get elected to the highest office who had been accused of sexual abuse of several women and by his own words showed his disdain for women. We had elected a man who would do nothing to further women’s rights, create stronger laws to protect women, or improve our system for parental leave. It felt like the women’s rights movement had been set back decades…and this was the world I was going to be bringing a little girl into. Many of the men in my life didn’t understand why I was quite so upset at this outcome.

Now I myself have never been sexually assaulted or truly felt I’ve been given less due to my gender. I guess I was one of the lucky ones. I also lived my life carefully because I’d grown up knowing that men couldn’t quite be trusted. As a girl, you grew up knowing that you would have to fight harder, work harder, and you still would likely earn less than your male peers. I was also fortunate enough to grow up with strong women in life. I had a great-grandmother who ran her own small business and served on her local town council, not something so common in the 1940’s. I had another great-grandmother who left her alcoholic husband and set out to raise half of her 13 children by herself. I was blessed with a Father who taught me everything from finances to car care regardless of my gender. And I read voraciously, I was a student of history and literature and fell in love with strong female characters. 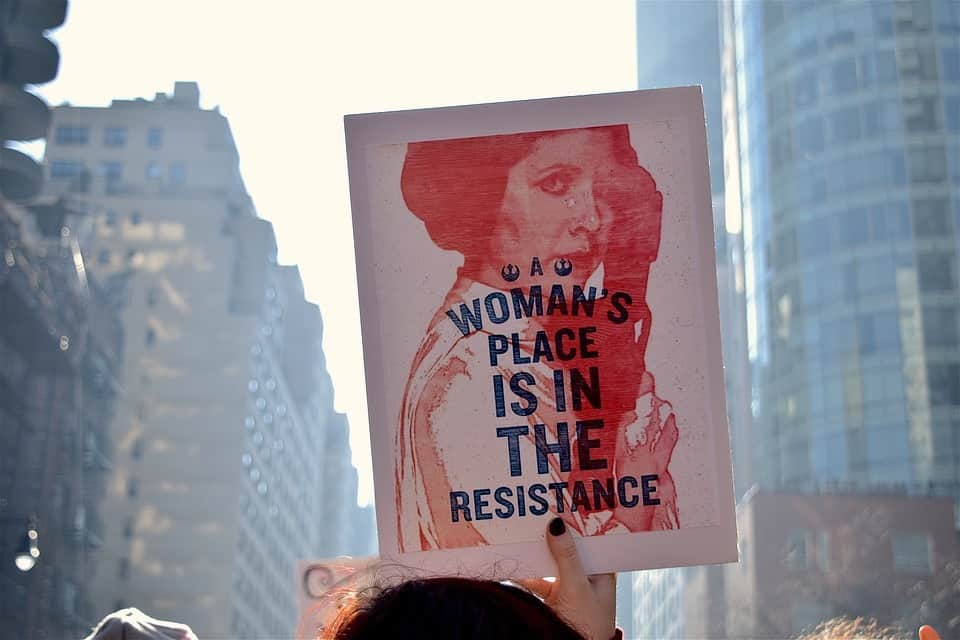 But I saw lots of girls around me who were not so fortunate. They did not have people in their life who taught them their worth…and society was certainly not going to teach it to them. A society that even today still asks when a woman is assaulted, what was she wearing? What was she doing? A society that seeks first to place the blame on the victim. And these questions come not just from men…but from other women. It’s been so ingrained in our society that the woman is at fault when a man acts poorly that even other women question her actions and integrity. I saw women get taken advantage of. I’ve heard stories of women who were raped and then faced those same exact questions. I heard just such a story just a few weeks back, but this time she wasn’t afraid to share her story. She’d been inspired to speak out because of all the other women lately who have been speaking out. She’s going to fight for justice even though it may take a year for evidence to be processed (this is completely unacceptable, but that’s a vent for another day). Change is in the air.

This morning I watched Oprah’s speech from the 75th annual Golden Globe Awards. She was the first black woman to earn the Cecil B. DeMille award. Earlier in the night, it was acknowledged that Barbara Streisand is the only female to ever win the Best Director award at the Golden Globes. I looked it up and the Academy Awards are the same, only one female has ever won the award. Oprah’s speech instilled in me something I haven’t felt much of lately…Hope. I watched it sitting on my couch watching my daughter play and the speech brought me to tears. It reignited the spark of hope that my daughter may grow up in a better society. One where she has a more equal chance at success. One where 1 in 6 women won’t expect to experience sexual assault in their lifetime (rainn.org). One where a fear and suspicion of men doesn’t have to always be in the back of her mind. 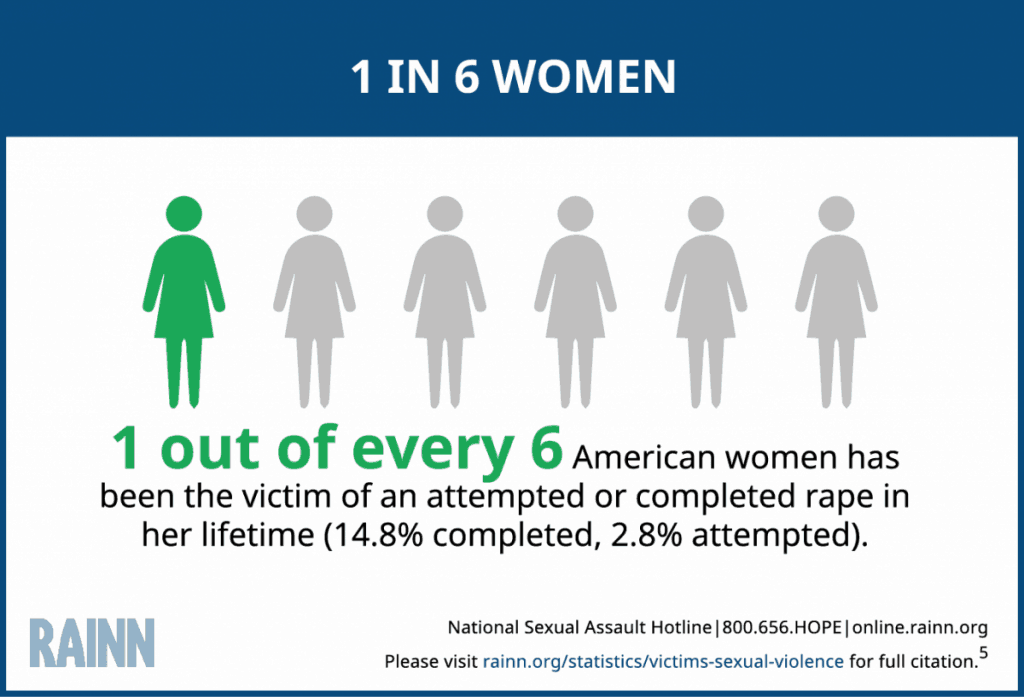 Last night was inspiring. The red carpet at the Golden Globes was filled with conversations about sexual assault, activism, and equality, instead of what designer the women were wearing. Both men and women were standing up and saying Times Up on our society allowing sexual abuse to be the norm. No longer will it be excused as “boys being boys”. No longer will women AND men stay silent about their own abuse, or having been the witness of such abuse. As Oprah said last night “A new day is on the horizon!”

What’s really changed is that people are speaking up. Enough are speaking up that action is finally being taken. Not just women, men as well. Men are speaking and refusing to be silent any longer about the actions of other men, they are refusing to be a part of the problem. Men are also speaking up about their own abuse, as women are not the only ones to fall victim to power dynamics. The power of words is so strong and silence can be just as deafening.

Hope is so strong. It’s what keeps us going in the face of overwhelming odds. It’s what helps us get up in the morning. It keeps us from burying our heads in the sand when things look bleak. Today I have hope that men like Trump will not set back the women’s movement. Instead, it will be a spark that ignites anger, that ignites speech, that ignites change in society. Perhaps it was needed to shake up the status quo. Today I have Hope that my daughter will grow up in a different society where she truly believes that she can be anything she wants and will not have to worry that her gender will hold her back. Hope that we will raise the next generation of men and women to not expect that men are the privileged and the powerful. And Hope that they will not be silent when power is abused.

I hope more and more of us will be inspired to speak up and join the conversation. My piece may not be the most eloquent but I felt a need to join the conversation, to include my own voice and the voice of my daughter in the conversation. All of us should speak up and share our experiences, and our hopes for the future. Let the world know that we will no longer be silent. We will no longer accept misogyny and abuse as part of our cultural norms. We will demand that things change in the future. The status quo has been put on notice that Time is Up and change is on the horizon. 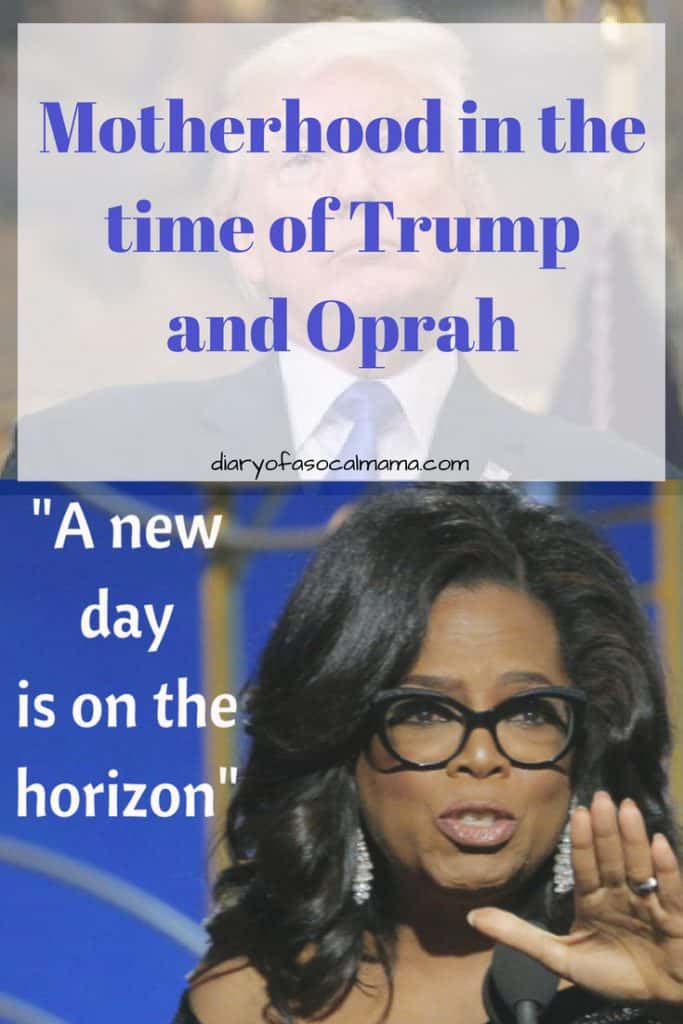 1 thought on “Motherhood in the time of Trump and Oprah”